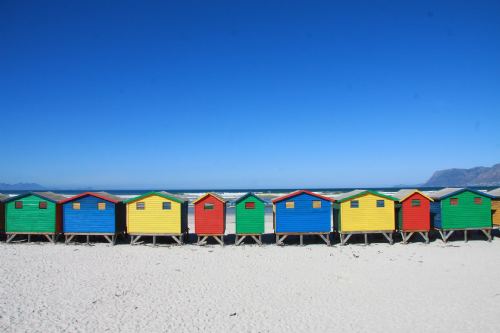 As the weather warms up and our thoughts turn to days out beside the sea, we may idly start wondering whether it might be nice to own a colourful beach hut….

According to recent research by Rightmove, the average asking price for a beach hut has risen by more than £10,000 in year.

New data from the online property portal reveals that the average asking price for a beach hut has soared from £39,382 to £50,336, an increase of 28 per cent.

Rightmove’s property expert Tim Bannister said: “Beach huts have become increasingly sought after over the past couple of years as more people headed to the British seaside for their holidays.

“This has driven prices up, with the frenzied demand leading to some being sold for hundreds of thousands of pounds.”

Prices do vary across the country, with areas starting at just below the £10,000 mark.

However, in Wells-next-the-Sea, Norfolk, a beach house was recently put on the market for £80,000, while in Southwold, Suffolk, they have been known to achieve almost £150,000.

And in Mudeford Spit, Dorset, a beach hut recently hit the headlines when it was sold for as much as £570,000.

In the past, those eager to purchase a beach hut have joined a waiting list but in recent times the chance of reaching the top has become even more remote.

Currently more beach hut owners are choosing to go down the rental route instead, cashing in on the high demand for staycations by letting their colourful shelters instead of selling them.

There are thought to be around 20,000 beach huts in the UK, most of which will come with added costs of ground rent, rates and an administration fee.

There tend to be tight rules regarding their use – owners are not usually allowed to stay in them overnight, for example, and there are restrictions on size, design and where windows are positioned.

James Eniffer, director at Sheen’s Estate Agents in Clacton-on-Sea, said places that are easily to reach often generate the most interest.

“We have seen a huge demand for people wanting a place near the seaside, which has driven prices upwards.

“The Tendring coast offers miles of impressive coastal walks along with some blue flag winning beaches too.

“Being so close to London with both direct rail links to London Liverpool Street and to the A12, the Tendring area is very accessible for a day tripper looking for an escape from the larger towns and cities.

“We often find that once people have a beach hut in the area, they hold on to them for many years for each generation of the family to enjoy.”

Will there be a summer slowdown in construction?Growth in popularity for co-living
Topics